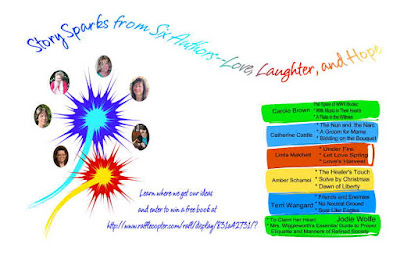 Welcome to the Story Sparks multi-author blog tour. Between May 21-26, 2018 readers get a chance to enter and win ebooks from six different authors. Today Catherine Castle is the featured author. Catherine’s winner may choose an ebook from any of her three books listed above on her book spine. Today Catherine will talk about the story sparks that started each of these books rolling. Read on to discover what inspires Catherine’s creativity and to enter the Rafflecopter giveaway.


Hi, everyone!
I began my writing journey as a stringer for a local weekly newspaper. The hardest thing about that job was finding ideas to write about. I was in Writer Heaven when the editor called with a story idea. It was like getting a bright, shiny gift topped with a beautiful ribbon. The problem was those editorial gifts didn’t come in as fast as I wanted them to when I first started writing. So, I had to figure out where to find more ideas to write about. And of course, the burning question back then was, “How do I find an idea?”

It’s also the question most people ask me when they find out I’m a writer. Now I know the answer. 

After I published my first book, a multi-award-winning inspirational romantic suspense titled The Nun and the Narc , my daughter bought me a tee-shirt that read Careful, or you’ll end up in my novel. I’m not sure if she knew how true that quote is, but I suspect she did, because whenever I’d hear, see, or read something interesting, she heard me say, “There’s a story somewhere in that.” For me story ideas are everywhere and within everyone. I find story spark ideas in: the things I’m interested in, in other stories, in the news, in things people do, in things people say, at museums, in places I visit, in places other people visit, in magazines, and even through the tidbits of information on the backs of cereal boxes.

The Nun and the Narc originally started with the heroine as a missionary to Mexico building houses for the poor. I’d been working on some news articles about Habitat for Humanity for the newspaper, which probably spurred the original story plot. But the story wasn’t working for me. I couldn’t get my head wrapped around the missionary heroine. Then a critique partner suggested I consider making the heroine a novice in the Catholic Church. Now, I am fascinated by nun stories. “The Sound of Music” is my favorite musical, and I loved the television series “The Flying Nun.” As a stringer for the local newspaper, I interviewed a nun who left the order to marry, and, in real life, I knew a nun who had also left the convent to marry. I do admit to having a curiosity about how those women dealt with leaving the convent, and I think part of that curiosity spurred my story.


The Nun and the Narc Where novice Sister Margaret Mary goes, trouble follows. When she barges into a drug deal the local Mexican drug lord captures her. To escape she must depend on undercover DEA agent Jed Bond. Jed’s attitude toward her is exasperating, but when she finds herself inexplicable attracted to him he becomes more dangerous than the men who have captured them, because he is making her doubt her decision to take her final vows. Escape back to the nunnery is imperative, but life at the convent, if she can still take her final vows, will never be the same.

Nuns shouldn’t look, talk, act, or kiss like Sister Margaret Mary O’Connor—at least that’s what Jed Bond thinks. She hampers his escape plans with her compulsiveness and compassion and in the process makes Jed question his own beliefs. After years of walling up his emotions in an attempt to become the best agent possible, Sister Margaret is crumbling Jed’s defenses and opening his heart. To lure her away from the church would be unforgivable—to lose her unbearable.

Although the book was a hard sell—the Christian market doesn’t usually like you to name denominations—the story was so intriguing to me, because of my interest in nuns, that I wrote it anyway, knowing it might never leave my hard drive. It was a book of my heart—inspired by my own interests and my feature stories for the newspaper. 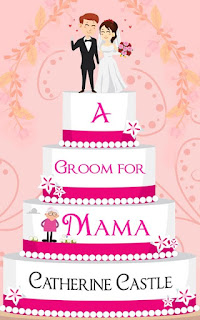 My second book, a sweet romantic comedy with a touch of drama entitled A Groom for Mama, got its inspiration from a radio play my husband and I wrote years ago, entitled a “Bride for Mama.” The original play finaled in the contest, but my hubby and I never did anything more with it. When I was searching for something new to write, I remembered the radio play. I asked my husband if he minded if I took the original premise—a dying mother wants her son to find a bride before she leaves this earth—and turned the plot on its ear, creating a new story. He agreed and A Groom for Mama was born. I found inspiration in another story.

A Groom For Mama

Beverly Walters is dying, and before she goes she has one wish—to find a groom for her daughter. To get the deed done, Mama enlists the dating service of Jack Somerset, Allison’s former boyfriend.

The last thing corporate-climbing Allison wants is a husband. Furious with Mama’s meddling, and a bit more interested in Jack than she wants to admit, Allison agrees to the scheme as long as Mama promises to search for a cure for her terminal illness.

A cross-country trip from Nevada to Ohio ensues, with a string of disastrous dates along the way, as the trio hunts for treatment and A Groom For Mama. 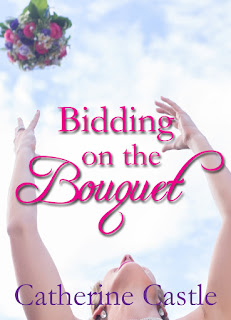 My most recent release, a contemporary inspirational romance entitled Bidding on the Bouquet, was ripped from an internet headline about a bride who was making her wedding attendants bid for places in her bridal party. My story, however, bears little resemblance to the news story. With plot twists and character changes I created a new story. All I needed was spark of an idea provided by the Bridezilla who wanted to get money for her wedding.


Bidding on the Bouquet

The chance to catch a bridal bouquet containing a solid gold rose makes underprivileged, down-on-her-luck grad student Marietta Wilson pawn everything she owns to come up with a bid to win a bridesmaid spot in the most prestigious wedding of the season.

When he discovers his sister is auctioning off bridesmaid spots in her wedding party, wealthy, elitist Chip Vandermere is appalled. Not only is it in poor taste, but no self-respecting lady would stoop so low as to bid. Convinced Marietta is a gold digger, Chip sets out to thwart her plans.

A social climber and a social misfit. Can a bridal bouquet unite them?


So, you might want to be careful the next time you ask a writer, “Where do you get your story ideas?” They might just say, “Why, from you, of course.” Because everything is fodder for the imagination of a writer.


Thanks for coming by today and don’t forget to enter a Rafflecopter giveaway for a chance to win books from these six authors: Carole Brown, Catherine Castle, Linda Matchett, Amber Schamel, Terri Wangard, and Jodie Wolfe.
(Catherine’s bio below) 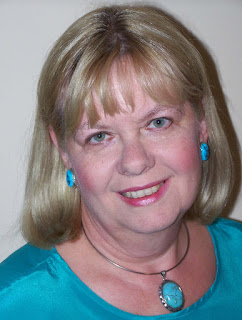 Multi-award-winning author Catherine Castle loves writing, reading, traveling, singing, theatre, and quilting. She’s a passionate gardener whose garden won a “Best Hillside Garden” award from the local gardening club. She writes sweet and inspirational romances. You can find her books The Nun and the Narc, A Groom for Mama, Bidding on the Bouquet and Trying Out for Love boxed set on Amazon. Connect with Catherine on her website and blog, FB, or Twitter @AuthorCCastle

Email ThisBlogThis!Share to TwitterShare to FacebookShare to Pinterest
Labels: A Groom for Mama, authors, Bidding on the Bouquet, books, Carole Brown, Catherine Castle, contest, Rafflecopter, The Narc and the Nun

Thanks for hosting me.