What's Better than a NEW Book? 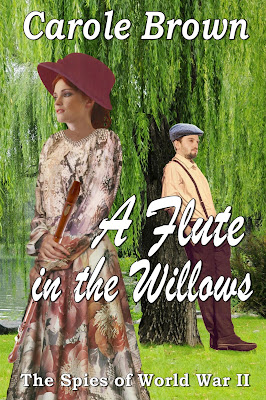 Book Blurb:
Both rebels in their own way, Josie and Jerry Patterson must figure out
how to keep the other's love...and keep the German enemy at bay.

She has two loves—her skating and Jerry, her husband.
But when he returns home looking like a skeleton trying to return to life,
she’s scared. What happened in Germany to change a man so much?
Has another woman captured his heart?

Jerry has vowed to let Josie live her own glamourous life...
especially after what happened in Germany.
But when his wife's life is threatened,
Jerry realizes he can’t stand by and do nothing.
Jerry has to risk all for the very soul and life of himself—Josie.

These two damaged, rebellious people learn the hard way
that leaning on God instead of their own selves and abilities
is the only true way to love and happiness.

Chapter One
1942
Jerry Patterson stared out the yawning black hole in the side of the plane. Seconds to go before he dropped. Night time parachuting was always a risky thing, but the pilot was one of the best who’d keep this baby right on target, lessening the chances he’d have to hit water. Trees were another matter, but with any kind of luck, the landing would go smooth.
Then to meet his contact and move into the German military high life. His pulse revved up. It was a dangerous game he was about to play.
Josie’s face flashed in his mind, and Jerry felt his heart soften. How he loved his tomboy wife. She was a beautiful butterfly dancing on ice, but put her in a social setting, and she was like a wild creature let lose in a maiden aunt’s prim parlor.
Three weeks of marital bliss. It’d been heaven on earth for him. One rapturous day—and night—after another. She’d cried the night before he’d left, but had been strength personified when he’d boarded the train the next morning.
If—no, when—he got home, he’d wrap his arms around her and not let her out of his sight.
Jerry stepped into the hole and dropped rapidly, counting. One thousand...One thousand one...One thousand two... With a jerk he pulled, the parachute opened above him, and he drifted earthward toward his assignment.

Email ThisBlogThis!Share to TwitterShare to FacebookShare to Pinterest
Labels: A Flute in the Willows, author, book, Carole Brown, november, romantic suspense, The Spies of WWII